I want the soundtrack to this please.

all the musics are on the repository https://github.com/Anuken/Mindustry/tree/master/core/assets/music

When hosting a game in the client, the research tree is not shared between players, making it impossible for my fellows to build non-starter buildings

so, there is a problem with my files, i try to initiate MINDUSTRY on my windows 64bit and it doesn't work, i am gonna try downloading the 32bit but, if this happened to someone and they fixed it, please tell me how.

(edit: 32bit worked, no need to answer me how to fix the files)

How do the [Server] files work? I installed one, but don't know how to start the server. I might be stupid but please help.

You can make a server ,where everyone can join, as it shown in this tutorial (if you have windows)

or see this site: https://mindustrygame.github.io/wiki/servers/

Um. I'm not spanish, and I already tried this, it didn't work for me. And i do have win10/

you need to run it by cmd to do something, hosting a dedicated server you will need to know a little bit of programming, specially the game language, java

Is it normal that the turrets’ range is not enough to shoot at walkers? They explode my whole defensive line whitout being shot by my defenses.

if you use duos then you wont be able to shoot at some of the enemies before they break the defenses, so I recommend using a long range turret

what to do in early phases of the game, then?

one of the best games on itch.io, hands down

I am definitely doing sth wrong but idk what. I. Can't. Get. Past. The. Tutorial. No, this isn't my first time playing a game. I am stuck at the '0/18 Copper' part because the game doesn't tell me what to do. If it was just mining the copper by clicking on it I wouldn't be here asking for help. Clearly, the game wants me to do sth with the 30 Copper my drone collected, but it doesn't tell me what, or atleast, not clearly enough. What do those 18 Copper mean? Where do I have to deliver them?

you have to mine the copper close to the core. Click and drag it from the back of your ship into your core. Anuke needs to increase the auto deposit range. Hope it helps!!

to the core, that big cube when you start is where everything is stored, so you can mine it manually, or set up drills with conveyor belts running into it, but if you mined it manually, then just click and hold on the copper your drone is holding and move it over to the core, where it will be deposited. I advise you to do this when you're no on top of the core, since it may not work there, as you might open the core to see it's contents

I really love mindustry, its my new favorite game and i love the V6 even tho its in alpha also in the local multi player if you join someone else you will automatically have everything however if you try to build bots that are a higher level than the host has unlocked they will loop the build animation. I know its in alpha, i hope they add a private online multiplayer.I give mindustry 10/10

Someone please help me on how to download and update my mindustry to V6 update on an andriod phone.

v6 isnt out yet, it is still in a beta testing phase. If you want it still, you'll need to download the beta itself

The downloads are above download the 105 Version then click on it and open it then it should tell you to update it. Then you are good, Hope this helps :)

you can apply for beta and update it then, but you will have to wait a few minutes and then probably restart google play store so it will show you you can update to the alpha

maybe because it's in alpha, and some features might be a bit broken

another thing is.. once you have captured a location waves stop spawning... right?

what ? no ! idk what r u talking about , but i do know there is no captury thingy in mindustry
(i have the best grammar in the world)

Capturing locations is in the alpha build.

You are talking about Version 104, in the new version (105) the map is devided into sectors, when you clear a sector it stops the waves

Yes thats is how it works from what I can tell, I've been on a map that I captured for over 10 hours and no enemies have spawned in after capture

Yes waves stop spawning. In the case of attack maps once you destroy the core the sector will be clear

yea i figured that out and thanks!

i love the new update! really cool that now there are way more locations to go to.. even if im having a very very hard time getting resources quicker so i can build up defenses faster its still quite enjoyable for me

why are there no instructions on how to use 6.0 alpha

Look it up. If you search hard enough, you'll find it

Its in alpha i.e Not complete yet there is no instructions

it's alpha, so it has probably not been implemented yet, or atleast not implemented on most things, as some items do have a description on how they work, like the plastanium conveyors

because the features aren't complete, so, a tutorial will be outdated too fast and be a time wasting

where did my progress go

I love the content added in the last release and, as a programmer, I am enjoying the CPUs thing very much in terms of automation.

However, I would like the processors to be able to toggle power node. Furthermore, it would be good to have simple light output (such as LEDs), in order to have fast information output (if a CPU does not detect items in a conveyor, a red block lights up and you notice it almost instantly).

Unit spawn is too long

Player damage is too low.

Pls put a guide for reconstructor

-units are supposed to take a while to spawn

-players arent supposed to be one man armies

I agree with most of the changes like unit spawn times, but really the player  firerate nerf(?) is actually really bothering me ngl

protip: if you want a better ship, try to unit-possess a core-nucleus.

I am aware of that, just unless on a custom map you generally use shard because getting the other cores is a grind in campaign

ah, thought you were talking about other modes

the overdrive domes are pretty op

Can't believe such a cool game is free, even with source code access...incredible, thanks a lot!

sadly if you want more features like easy multiplayer then you need to pay 5.99

how about a VR version?

the game is 2d, how the heck would that work??

Maybe not VR but i bet a Mindustry 3D would be Awsome, like satisfactory but better

Have you thought about advertising? The game is really good, if more people find out about it, then the game will most likely become very popular!
Ps. I'm from Russia, and translate Google Translater (sorry for mistakes in the text) :D

You can get the Pre-Alpha for v6 here:

Bought it on Steam! Absolutely awesome!

It is not only an incredible game but it's also GPL3-licensed. I'll buy it on Steam.

how do i ADD a mod to the game. all guides i have found where how to MAKE mods

you can find a name mod on GitHub, open mindustry, click on "import github mod" then enter the name of the creator, a /, and the mod name, press import, and you're done

the map is broken. when i open it becomes blac

How do i stop oil from burning?

You need a turret that shoots liquid, namely the Wave. You'll need to fill it with either Water or Cryofluid. It will automatically target any fires within its range and try to put it out.

Ay this is helpful thank man

how do i change the language

why is some of the game translated and some parts not?

Technically the game is still being developed, so some translations might not be completely in.

This game is favourite in the strategy catagory!

Amazing, definitely the best FOSS game I've ever played. Love the art style too. Definitely going to pay for it now and possibly get it on Android.

For all the people who paid for mindustry on steam and on mobile, bruh
P.s: love this game <3

Support the developper is better than just playing it for free...

Anuke has their own reasons. On iOS, the fees to place it on the Appstore is fairly expensive and a long process, so to make up for it, it's paid on iOS (Free on Android though, since Google doesn't slap you when you want to put an app on to Google Playstore). The Steam version, while identical to the version here, has access to all Steam functions, such as Steam Play (removes the need to port forward), the Steam Workshop (for downloading maps and mods), and auto-updates (so you don't have to constantly check back here). It's also just a nice way to support the dev, and it doesn't even cost much.

i love this game, i think how about 3d

Awesome game, hope you can keep developing it and make it what you want it to be

has a lot to compare to factorio, but its distinct enough to be fun. this game is more based on pressure of advancing ur defenses rather than building a rocket. 10/10

I can't seem to run the .exe file. Does anyone have an idea or a guide because I have small brain.

make sure the .exe is in the direc folder, although i dont exactly know what ur problem is 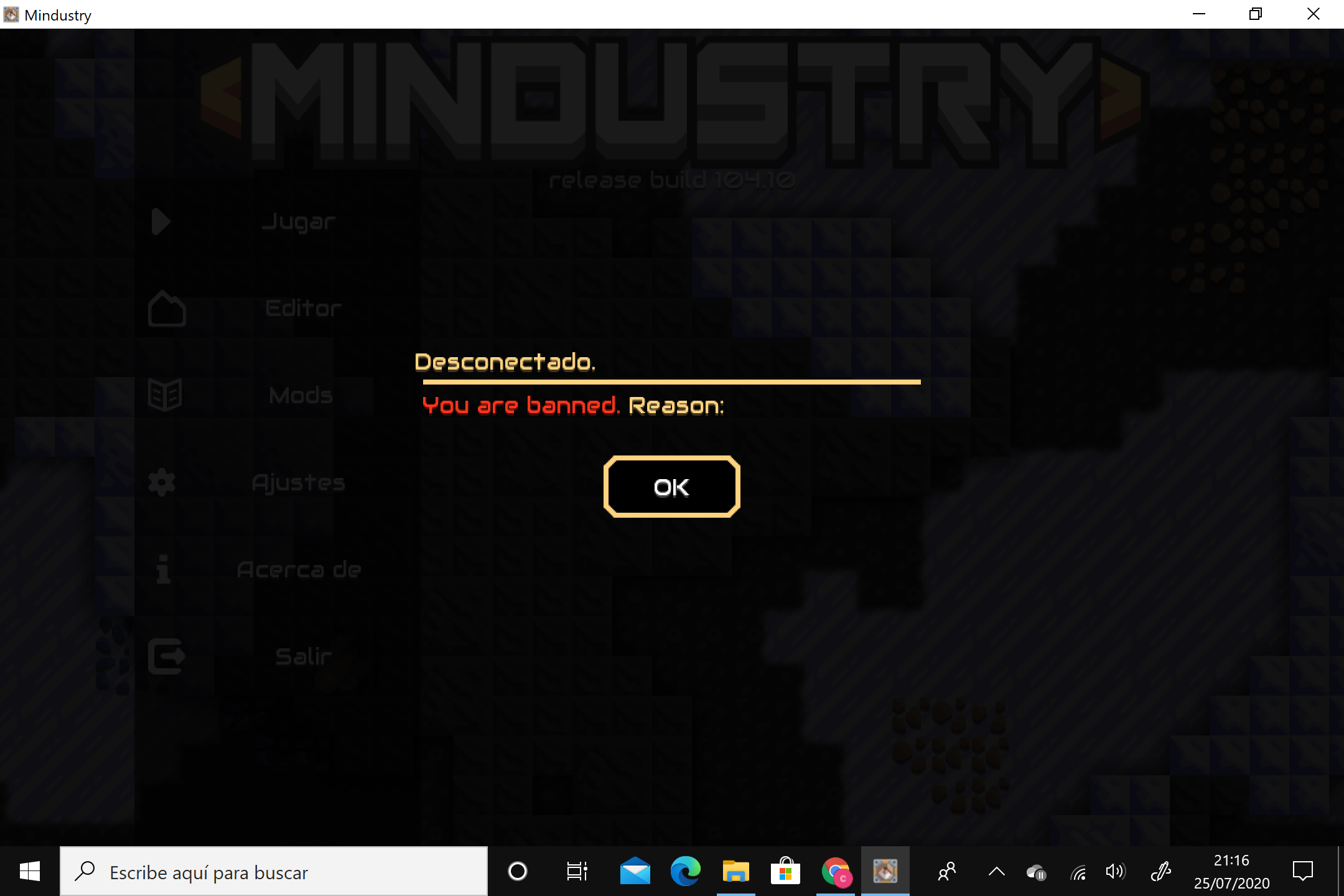 Maybe try playing in singleplayer first? Sounds like you did something wrong, probably because of inexperience. There are also some tutorials on youtube to get started, if it's more convenient for you.

if the multiplayer community is bad the game isnt automatically bad. you're probably making a mistake. if someone says ur doing something wrong ask them how to fix it. also play single player to practice.